The following excerpts highlight John Ashbery’s comments on the Hudson house in published interviews and in an essay he wrote for Architectural Digest.

from a 1985 interview with John Ashbery 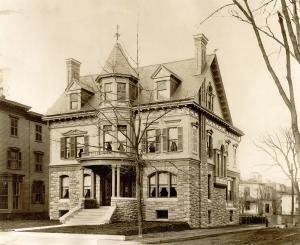 Question: You’re interested in Pater, and Victorian architecture and turn of the century music. You also have a very beautiful Victorian house in Hudson in New York State. Would you like to say something about that house and what it means to you?

John Ashbery: I never intended to buy a house but then I saw this rather lovely nineteenth century house, which was very cheap. It reminded me of my grandparents’ house where I lived when I was a child in the city of Rochester. My grandparents were both born in the 1860s. They were actually Victorian people and I spent a lot of time with them … I was always very attracted to the cosiness and the gloom of Victorian life, and always felt very much at home in that environment. Now I’m happily ensconced in my gloomy Victorian villa, which is somewhat grander than the one in Diary of a Nobody — another of my favourite books…when I first stepped into this house which had been on the market for a long time because nobody wanted it, I thought, ‘This is perfect for me.’  There’s a kind of morning room where the sun comes in where I like to sit and read the morning papers — as you might expect. Then I go upstairs to the other living room which is more unapproachable, where you’re protected from people looking in the window. I guess it satisfies my nostalgia. It was a terrible blow to me when my grandparents had to sell their house.

from a 1994 interview with David Herd

Question: Your poetry is associated with the city but frequently incorporates rural terms and references. Do you feel that the landscapes you encountered as a child have found a way into your poetry?

John Ashbery: When I was very small I lived with my grandparents much of the time, in the city, in Rochester, New York, where my grandfather was professor at the university.  But when I was seven years old he retired and left that house and moved to the country to a little village where he had grown up, on the edge of Lake Ontario. My parents lived a few miles away on a farm. I always felt a great nostalgia for living in the city, and for that house in particular.

from a 1994 Architectural Digest essay on the House Restoration 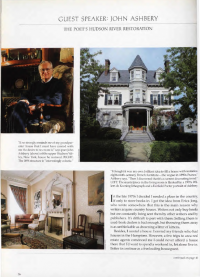 John Ashbery: If I’d known the financial pitfalls that lurked behind the modest purchase price of the house, I never would have bought it, which would have been too bad since I now feel very much at home there, even though I’m still what locals call a “weekender”—anyway, a long weekender.  Upstate New York is where I was born and raised, and though that part of it is two hundred and fifty miles west of where I am now, there is something familiar about the land and the cadence of people’s voices that perhaps amounts to “roots.”  And New York City, where I wanted to be when I was growing up and where I’m still based (I find it easier to write amid the distractions of the city than in the country, where there are so many more interesting things to do, like buying a pumpkin or looking at leaves), isn’t far away.  So I feel I’ve successfully collaged two nostalgias—that of the metropolis I never knew until I was an adult and that of the country where I spent my childhood.  And nostalgia, if it isn’t good for anything else, seems to elicit poetry.”

from a 2003 interview with Mark Ford 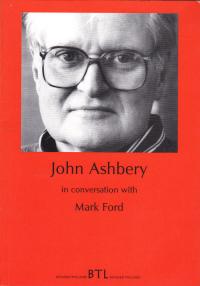 Question: In your Architectural Digest piece on your house up in Hudson, you describe it as reminding you of your grandparents’ house in Rochester.  It’s a very beautiful house, but also somewhat gloomy.  Do you find gloom inspiring?

John Ashbery: A certain kind of gloom, yes—‘a gloom one knows,’ I think is how I put it.  The house has a reassuring feel to it when I’m there, which does remind me of my grandparents’ house, which also seemed to me gloomy and peaceful, I suppose because when I was there I wasn’t always feeling nervous and wondering what mood my father was in.  It doesn’t look that much like my grandfather’s house, which was on a much more modest scale, but it was built in exactly the same period, the 1890s, and when I first looked at it, it immediately seemed somewhat familiar.  I guess it represented for me the happiest part of my childhood, when I felt secure and taken care of, and was living in a city and had other children to play with.