John Ashbery’s essays on “eccentric spaces”—calling on Robert Harbison’s term for strangely, even mysteriously iconic homes—are essential reading, especially when considered against the backdrop of his thinking about his own house.  Here are three House & Garden pieces and one Architectural Digest essay composed during the decade when Ashbery completed the majority of his Hudson house restoration and decoration projects. 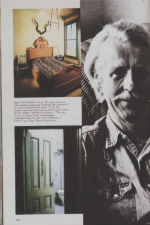 May, 1983 | Essay on David Ireland’s house in San Francisco, which has since become a museum.
Using an epigraph from Robert Harbison’s Eccentric Spaces (1977), a book of essays on architecture and literature which Ashbery read and admired shortly after it was published, Ashbery describes what can be learned about the artist David Ireland by studying his San Francisco house. (Republished without accompanying photographs in Reported Sightings.) 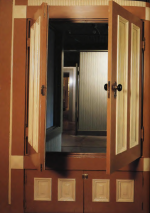 March, 1987 | Essay on Sarah Winchester’s mansion in San Jose, California
Ashbery’s essay demonstrates how an artist expresses ideas through the languages of architecture and decoration. He contends that despite “all her peculiarities,” Sarah Winchester, the heir to the Winchester rifle fortune was “an artist” in her construction of an 1880s “eccentric, rambling mansion.” 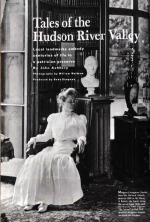 “Tales of the Hudson River Valley”

April, 1992 | Ashbery chronicles the family and architectural histories of the handsome Rusconi, Forth and Rokeby homes in the upper Hudson valley. These well-known (and lesser known) estates are grander, more established versions of the Hudson House.

“Frederic Church at Olana: An Artist’s Fantasy on the Hudson River”

June, 1997 | Ashbery describes the “design and construction” of Olana, the Hudson Valley estate of nineteenth-century painter, Frederic Church, as “the culminating creative act of Church’s career.”  Ashbery writes the essay in the late 1990s, during a period when he is living in the Hudson house much more and reflecting on the relationship between an artist and his house.